To recap, let’s review a term or two from professional wrestling (PW). I’m obsessed with this because if there’s a better analogy to the current political situation in the US then I don’t know what it is).

work: The standard wrestling match with a hero (babyface) villain (heel) and a pre-determined result.

shoot: Usually a departure from the script when a wrestler begins to actually physically attack their opponents.

kayfabe: The system by which promoters and wrestlers pretended that PW wasn’t pre-determined.

breaking kayfabe: Talking about how the PW industry worked to outsiders (including fans).

The reason that PW was built around works was that shoots are ugly and dangerous (they often resulted in severe physical injuries) and they were nothing that a narrative sport could be built around.

Many viewers realized at some level that the results were pre-determined and much of what seemed like devastating physical maneuvers didn’t really hurt the wrestlers but during the match the kayfabe system allowed them to suspend disbelief to go along with the show the same way that opera audiences would suspend disbelief to allow themselves to be moved to tears at the plight of Madame Butterfly. 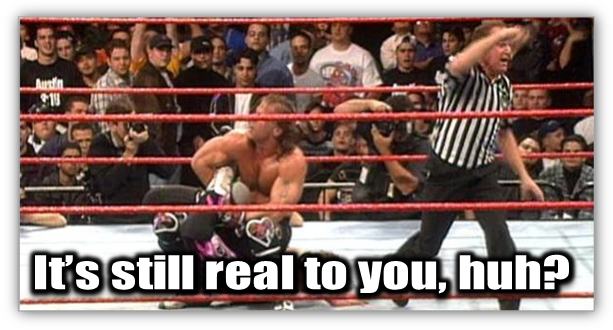 The referee is pretending to change the pretend ending which will cause much drama….

worked shoot: A work designed to look like a shoot. This ranged from wrestlers using other wrestlers’ real names on camera or complaining about the choreography of matches or cameras following wrestlers backstage and airing the sport’s dirty laundry in public. This wasn’t just breaking kayfabe, it was shooting kayfabe in the head.

The worked shoot also destroyed PW’s fan base. The excitement at seeing the curtain lifted didn’t last long and it was too hard to go back to pretend to believe in business as usual. Yes, fans now are savvy and openly discuss the artifice of PW…. and there are far less of them. PW on TV and in real life only draws a shadow of the audience it once did when kayfabe allowed fans to pretend to believe what they were seeing.

What’s going on now is that the same thing that happened in PW is now happening in US politics, but that’s a topic for another post or two….

Like Loading...
This entry was posted in Uncategorized and tagged campaign 2016, political systems, professional wrestling. Bookmark the permalink.