It Was Thirty-Five Years Ago Today

On December 13, 1981 the communist government of the Polish People’s Republic (PRL) declared Martial Law. The short story is that between communist inflexibility and popular discontent with comunism (manifested by the Solidarity movement) the country was careening out of control. The government was afraid of Soviet “aid” (a la Budapest in 1956 or Czechoslovakia in 1968) and they cracked down on dissent hoping to the keep a lid on things until they calmed down. 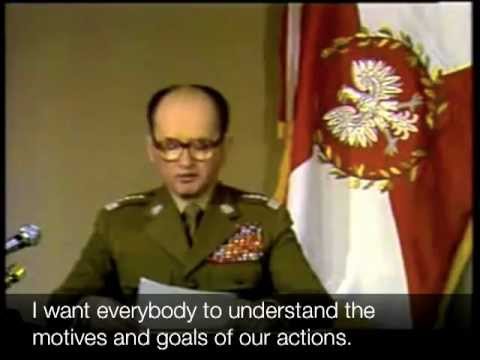 We get it – your’e scared. Martial law being declared.

The reason Solidarity was so effective against communist authority was that it, briefly, united factions that actively disliked each other so they could unite against the communists. Time and time again, either the religious working class (less educated and prone to see Jewish conspiracies behind every bush) or the intelligentsia (better educated, less traditionlly religious and many with varying degrees of Jewish ancestory) would stand up against the communists call to the other side for support and get wiped out while the other side did nothing.

The problem with the People’s Republic…. was the people

They came together and worked together in Soldarity and the effects were devastating for the communist system – and ultimately terminal as the country began its walk out of the Soviet prison not much more than six years after Martial Law was lifted. Of course, freed of their common enemy the two sides almost immediately began working against each other again.

The awkard Latin-slavic hybrid that shook the world.

Today, the two sides have changed membership somewhat but are more bitter at each other than ever. And rival demonstrations are happening in the streets of Warsaw between enemies (very roughly: the old intelligentsia) and supporters (very roughly the religious working class) of the current government each accusing the other of crimes against the Polish nation.

Still protesting after all these years….

That’s what’s interesting about living in a place where ideological questions are still up for grabs. It can be tiring as the petty bickering never stops, but it’s also kind of invigorating.

Like Loading...
This entry was posted in Uncategorized and tagged communism, life in Poland, Solidarity. Bookmark the permalink.