The Songs with a Bye

This year more than ever showed how wrongheaded giving some countries a bye into the final is. Let’s take each one in order of appearance.

Italy – Italy is very good at producing grand sweepingly melodic pop anthems so I’ve always wondered why they don’t send any to Eurovision. They finally followed my advice. The song is pretty good melodically and the singer, looking a little like a mafioso apprentice, gives a committed but still fun performance. The song apparently is a cataloguse of pop culture and/or spiritual references and the singer is cavorting around on stage with someone in a gorilla suit… Eurovison….. Italians…. whadderyougonnado?

In context, this moment from Italy makes perfect sense (it makes no sense).

Spain – Spain has (still?) a thriving pop music scene with its fair share of memorable songs and talented performers. But they almost always send something to Eurovision that’s just kind of terrible (not just true of Spain but they’re the worst offender this year). The singer is trying for a surfer dude vibe but ends up with a skeezy beach stoner-who-does-porn-on-the-side vibe. The verses of the song (sung in Spanish) aren’t too bad but he does the chorus in English and his English is terrible, listenting to “Doo eet fore yore lohvair” repeated 20 times makes me want to ally with the IMF in crushing Spain. Too harsh? Yeah, but Spain always seems to lose all gracia when it tries to be international.

United Kingdom – Generic female power pop ballad (which is far better in terms of material and delivery than the dreck that the UK usually sends). There’s lots of sparkly gold in the projected imagery and the audience is really into it as if by supporting her they could somehow undo Brexit… The singer weirdly seems like she’s lecturing the audience with a bunch of odd didactic gestures…. 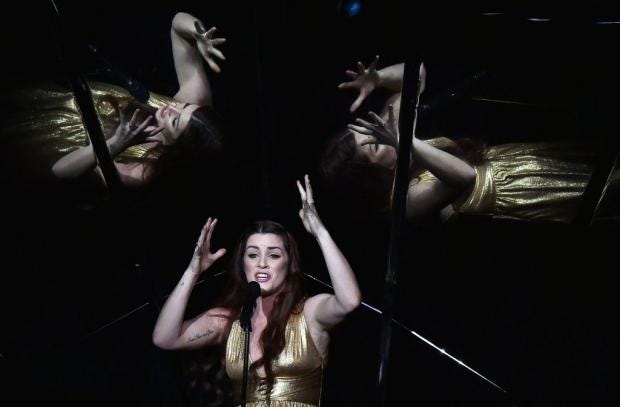 The UK demonstrates… something?

Germany – Oh Germany, as clueless and tactless as ever. On paper the song isn’t that bad, and the performance by a barefoot woman with short blonde hair, amazon looks and wearing a stray costume for Star Trek: The Next Generation does a very good job with it. But it seems like some anti-materialism anthem and the punchline (roughly) “That’s what you call a purrrr-feckt LIFE!” seems like cruel mockery delivered, as it is, in a country wracked with conflict and corruption and in the middle of a long and painful social transition. Not to mention that about five or six of the other countries participating are being systematically destroyed economically by German monetary policy with no hope of ever recovering… Hey Deutschland! Feck Dich Du Arschloch!

Ukraine – Earlier, one of the greasy, smarmy hosts had promised that one of the songs would feature “A giant hat!”. About halfway through Ukraine’s entry with a giant 3d head (why? Eurovision! That’s why muthafucka!) I realize he was trying to say ‘head’ and not ‘hat’ after all. Anyway… the less said about this the better. Undistinguished rock in poor English by guys dressed in dystopian sci fi outfits. This is what countries do when they want to make sure they don’t win (hosting Eurovision is an expensive business and often countries seem to choose songs that are doomed to fail on purpose). 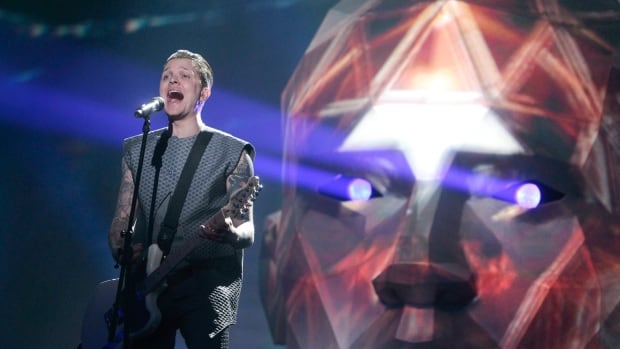 Ukraine goes that extra mile to keep from winning…

France – Somebody on the technical side hates France or the French side has suicidal tenencies. A pop dance song that’s better than most French entries but the projected visuals start spinning around in a way to guarantee seizures in anyone so prone. The singer is dressed in what should be a cute mini-skirt but it’s ill fitting and manages to make her look hulking and ungainly. Attempts to walk like a model look like a sailor’s first moment on dry land after six months at sea one moment and a cowboy bellying up to the bar the next… France attempts to sexily stroll around the stage… succeeds in stomping

They keep trying to speed up voting, now the representatives of the juries only anounce their 12 point picks. But the deadly dull small talk with the hosts is just agonizingly bad and infuriating. They should totally announce the jury results the same way they announce the popular vote results (in ascending order from least to most points).

I was gratified that the two worst songs with a bye stayed firmly in last place through the jury voting and popular voting. If they had to qualify like other songs they wouldn’t have made it and two better songs (by some defintion of ‘better’) would be there instead. Ukraine also probably wouldn’t have made it which is rougher but at least they could relax and enjoy rather than worry about scoring.

Portugal took an early lead and never relenquished it with Bulgaria trailing not too terribly close. I was gratified that Romania did very well (better in the popular than the jury vote!) and Austria’s “Why are you so awful when I’m so cool?) entry (boo) was stiffed in the popular vote.

Portugal also won the popular vote (by a large margin!). I’m surprised that fewer people are noticing the coincidence of Portugal winning the first time ever and the 100th anniversary of Fátima observed the day before by the Pope…. I’m not religious but…. hmmmmm

I’m glad Portugal won (especially over the thoroughly unoriginal Bulgaria) and especially glad that they won singing in Portuguese… but I still don’t quite get the charm of the song or the performer. He took his sister (who wrote it) on stage for the victory lap and they sang it together. I would have like her version better but I don’t think she would have qualified…

Originally the idea of Eurovision was that the lyrics were an integral part of the song and juries were provided with translations of all the lyrics (not idea but better than the alternatives). Once language was freed up most countries choose to do songs in English whether or not the lyrics make any sense or if the performers can peform well in English (many, many, oh so many….. can’t).

Nowadays the problem of sending a song with lyrics that are about something is that audiences at home doesn’t get it. Most the English lyrics are really kind of vapid or nonsensical but audiences understand just enough to respond.

It would be great if they could manage subtitles in the original with local translations for each entry. Given the technology that they’re capable of that shouldn’t be too problematic. It would encourage better lyrics and discourage doggerel like Spain’s “doo eet” this year…