What’s Really the Deal with Game of Thrones Season 7

Okay I just finished season 7 of Game of Thrones….. and it’s baaaad. Even the good parts are… not that good.
The main culprits are
Timing: This is a problem at the macro level (different parts of the story were out of whack with each other in normal story arc terms) and the micro level (people moving around Westeros at the speed of plot devices). The earlier seasons were interesting not the least for the leisurely pace. It took a long time to get places and the story could slow down to their pace. In earlier seasons the expidition beyond the wall could have stretched over a few episodes, but now it’s all crammed into one. I liked a lot of the interactions between the men during the expidition but they would have been better if they weren’t all crammed together.
Fan Service: Waaaay too much fourth wall going on here. Gendry’s back! And he makes a joke about rowing! Heh he! Arya makes a joke about making pies! Melisandre mentions Fire and Ice! The Hound and Thormund have a funny conversation about Brienne! Brienne and the Hound have a funny conversation about Arya! Just! Stop! It!
Storytelling: The show runners just don’t know what they’re doing. I kept having the idea that what I was watching was not what was originally intended but the result of massive compromise after earlier plans had gone awry. A lot of it looked stitched together of scenes that were meant to be something else. The worst example of this was the Sansa, Arya and Littlefinger plot which made no sense. That couldn’t be what they wanted, could it?
Suspension of Disbelief: I’m completely okay with accepting ice zombies, dragons, blood magic, resurrection and the rest but it has to make some internal sense. So….. where did the ice zombies find those massive and very long giant chains? On the one hand it made for an arresting visual on the other I couldn’t help but imagine a bunch of ice zombies working in the ice zombie factory making them because how else would they end up there? And if ice zombies can’t swim how could they drag the dead dragon to the surface….? My head hurts. 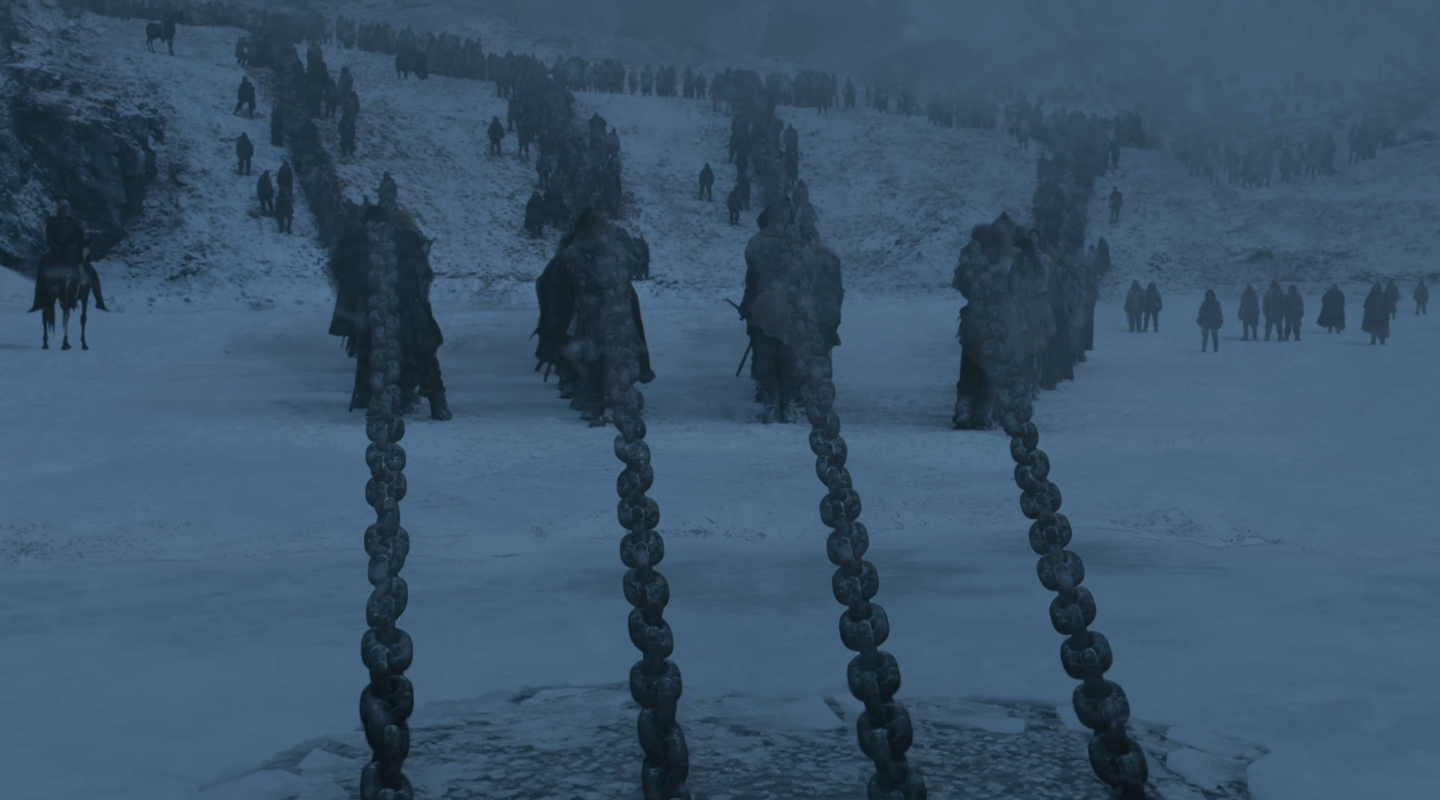 All in all the show no longer feels like it did. It feels like a big dumb 1990s show with better special effects. It’s just big scenes held together by filler with wisecracking characters and wacky hijinx.

This is totally what the show is now like.
This old youtube video about a 1990s Game of Thrones feels much more like the current show than the first few seasons.