How Long Does Collective Trauma Last?

Longer than 30 years. In Poland, under pressure from old time Solidarity (Solidarność) activists to whom some favors were owed the government decided to introduce a law that would close most stores on Sundays. Not all Sundays, just two a month (to begin, the plan is to expand this later).

Welcome to the bounty of socialism! (Polish butcher store, 1970s or 80s)

And… people are losing their shit. For the last couple of weeks there have been almost daily stories in the media for how people are going to deal with this and different plans for possibly trying to get around it (or make the most of what is assumed to be a terrible situation).

Ration cards for food, introduced in the early 1980s (if you could find meat or butter on sale which was very far from a sure thing).

The reason for all the drama goes back to the 1970s and 1980s when for various reasons the economy hit the dumps and massive food shortages (and shortages of everything else) began. No one starved but buying food in regular stores became an exhausting ordeal of standing in line (many people spent several hours in line every day just trying to do normal shopping) and other alternatives (private markets, black market, underground trading networks) were expensive or risky. There were also lines for big ticket items that lasted weeks or months and were maintained 24 hours a day (people had shifts they had to report to wait in line). 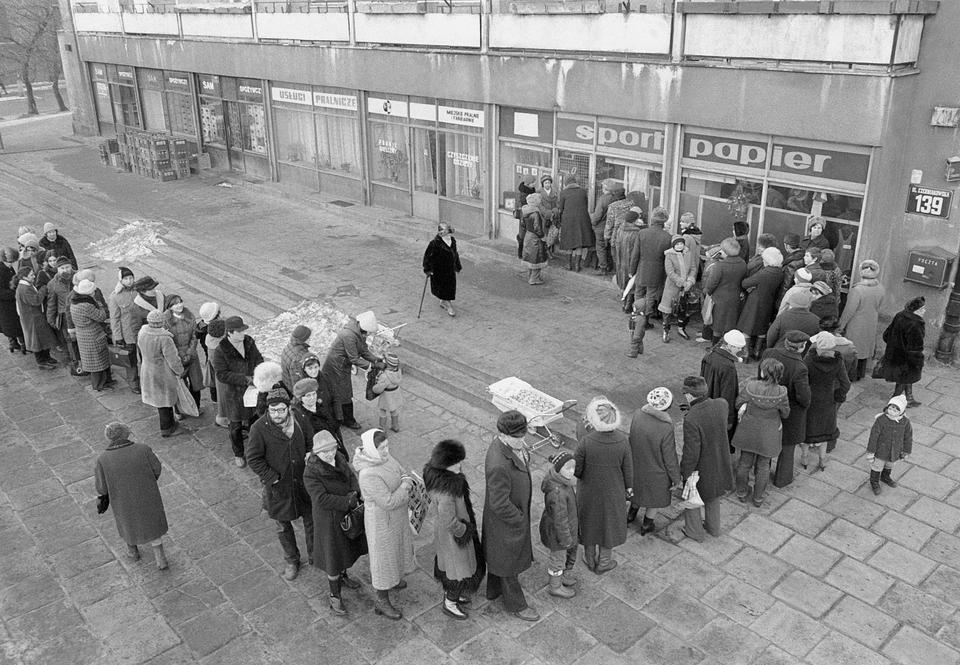 Line to buy paper…. let me repeat….. paper. Polish people are still not over this.

The lines ended about a year or so before the fall of communism, I forget the details but I’ve heard that sometime in 1988 stores were suddenly much better stocked. But the trauma related to shopping was extreme and everybody had stories about weird, funny or tragic things that happened while waiting in line. And the effects can still be seen. Even now when stores will only be closed for a single day (as on January 6, Epiphany) people crowd stores and buy what seems to be enough food to feed an army division. Closed stores make Polish people very, very, very nervous.

On the scale of collective trauma, difficulties in shopping rate pretty low maybe between a two or three on a scale of ten. As I said, no one starved (in the countryside people had too much food and bought subsidized bread to feed to livestock because, wonders of socialism, it was cheaper than animal feed). But the scars are still present in people’s psyches and have been handed down to some people who were born after the fall of communism in 1989. It’s not universal and people born in the last twenty years or so are mostly (not entirely) more relaxed about the idea.

The takeaway here is that people are not blank slates ready to be filled up with government policy (or to be nudged as they say now) but instead are complex and motivated by all kinds of different things that would be social planners never consider.

Like Loading...
This entry was posted in Uncategorized and tagged collective trauma, life in Poland. Bookmark the permalink.