It’s the most magical time of year…. when almost all of the countries of Europe engage in mock warfare via songs of questionable quality and the winner’s booby prize is the duty to stage next year’s terrifyingly expensive show with no guarantee of real popularity for the winng song. In other words Eurovision 2018 has begun and I wanna tell y’all about it!

Last year had a surprise win by Portugal and the Portuguese are determined to do things up…. on a budget since their economy has never recovered from the disastrous decision to adopt the Euro (note to any countries out there: don’t adopt the Euro – it’s terrible). Anyhoo, the films showing the artists interacting with locals feature incredibly beautiful landscapes and architecture but they are clearly saving on the stage and the ‘effects’ are mostly pretty restrained without the elaborate digital images being beamed all over the damned place.

There were sound problems with many singers’ voices sounding colorless and washed out. But this is a common problem that is usually fixed by the second semi or the final.

They’ve adopted a nautical theme with a shell as a symbol and the hashtag #allaboard. The downside is that the stage is dominated by a massive structure that I first thought was supposed to be a whale skeleton. Later I realized it’s probably supposed to be a ship but I still see a giant whale skeleton mocking the performers with its perpetual message ‘foolish mortals… all is vanity’. After that cheerful note, let’s get on with the show!

Azerbaijan: An odd start. There used to be restrictions so that the songwriters or performers had to have some connection with the country but even after those were jettisoned most countries try to have some kind of national link with some aspect of their entry. Not Azerbaijan, a Greek performer and Swedish songwriter (or vice versa I can’t be bothered to keep these things straight) helped to remind the audience that fluidity is not always a good or interesting thing. The song is standard issue Eurovision female ballad with a hook reminiscent of Sweden’s next to last winner. White triangles on stage are reminiscent of the Explorer’s monument in Lisbon. Interestingly whenever I saw pictures of that I assumed the figures were roughly life size so I was surpised when I saw it in real life and finally realized they’re 30 feet tall. (yes my anecdote about a monument in Lisbon is more interesting than the song). Next.

Iceland: You know how sometimes the first impression you have of people is terrible and unfair but you just can’t shake it? That’s me and Iceland’s entry – an earnest poppish thing that I can’t remember because the entire time it’s on I’m thinking “This guy has a career as a film Nazi!” I half expected him to start in with a chorus of ‘Tomorrow belongs to me‘ . I realize this is all terribly unfair and I’m sure he’s a perfectly nice guy who hates any kind of fascism but… damn, he looks like the Platonic perfect embodiment of Hitlerjugendness. I’m now expecting him to show up on The Man in the High Castle.

Albania: A rockish thing that isn’t that impressive but I’m gonna say thumbs up because he sang in Albanian. Most of the time countries opt for International Crap English (the lingua franca of Europe and the most dreadfully boring language in existence) so I’m always extra-support of those who choose other languages. He also overcomes the bad sound system and his voice has much more presence than anybody else’s.

Belgium: It’s important for countries to choose a theme and stick with it. This year’s Belgian song sounds like a rejected James Bond theme song (from the 90s when they were doing retro style big ballads). It especially reminds me of ‘The World is Not Enough’. But that needs a confident woman who can simultaneously project sexuality and restraint. The singer here just looks kind of crazy (nb. I’m a big fan of Eurovision crazy ladies when done right, but it doesn’t fit the song here). She has nice green eyes but someone applied waaaay too much black eyeliner which gives her that look that MRAs call ‘the thousand cock stare’. If this makes it to the final they really need to rethink the presentation.

Czech Republic: White boys shouldn’t rap. Equal parts last year’s Moldavian entry, lame white rap and bad choreography (as three guys, god as my witness, try to twerk and it’s the most depressing thing ever).  Most of the time I’m glad that people in Europe don’t take the ridiculous American ‘cultural appropriation’ fetish seriously, but at times, like this…. I almost wish they did. The one saving grace is a flying leap the singer takes over several stairs at the end.

Where are SJW’s complaining about appropriation when you need them?

Lithuania: I nice little tasteful song about growing old…. and I hate it. In another context I could probably deal with it, but Eurovision? No. No. No. I’m wondering if the singer was ill because her voice is soooo washed out and she whispers some lines more than sings them. Seriously they should never play this around actual old people as it would cause a rush for the assisted suicide hotline.

Israel: I’m writing this before looking at the results, but I’m sure this will make it through and I wouldn’t be at all surprised if it wins the whole shebang for one simple reason. It’s the only song with a hook that gets into your ears and won’t leave, no matter what you do. The performer combines ‘body positivity’ (she’s fat and unapologetic about it) with a Eurovision crazy lady vibe (she starts by mimicking a bunch of electronic sound effects) there’s also an entire wall of the Japanese waving cats and her back up singers do the funky chicken while she mugs for all she’s worth. Next year in Jerusalem?

Belarus: Ah Belarus, what a weird place you must be. One year they had singers sprout butterfly wings and one year (swear to god) there song was ‘I love Belarus!’ (which proved to have limited international appeal for some reason. Last year they easily made it into the finals with one of my favorites in the contest – an uptempo folk ditty sung in Belarussian. This year   and this year they’ve gone with a dreary ballad sung in English and the year’s worst taste gimmick. At the beginning he’s holding a rose and at the end he turns his back to the audience and you see a dozen roses growing. out. of. his. back. Who is this supposed to appeal to? I mean if I could figure out the motivations of the people that put the performance together I could probably publish the results in a peer review journal. What a weird, deeply weird place Belarus must be.

Belarus’s contestant showing off his hairy back…

Estonia: My favorite Eurovision crazy lady so far. She sings in Italian (classical style with a bunch of piercing high notes) while draped in a skirt that covers the entire stage and reflects (or projects?) flashing lights and special effects. It has no chance of winning, I think, I hope, but I want to see it again. Make it into the finals, please! 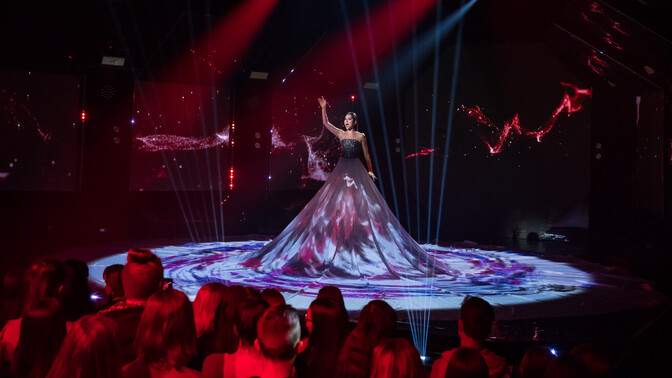 Estonia’s skirt of many special effects

Bulgaria: Oddly boring. A Swedish song, with weird non-logic lyrics ‘I love you beyond the bones’ What? The only interesting thing about the performance is the female singer’s outfit which looks like a science fiction nun’s habit and a few seconds of Bulgarian vocalism at the end. I don’t get it. Bulgaria has one of the great vocal traditions in Europe but they can’t seem to translate that into an interesting Eurovision song. I think they need to open a government investigation.

Macedonia: I haven’t seen all the official videos this year (though I’ve seen more than last year where I didn’t watch any before the contest). Now I’m thinking I should check the official video for this out because I can’t really believe that it was supposed to sound like this. It was odd and disjointed (which I usually like) but it sounded like everything broke down in the middle before somehow recovering. What is going on here?

Croatia: Meh, not so memorable performance of a not so memorable song. The most interesting this was the dress which was equal parts Victoria’s secret and Morticia Addams. The song is also guilty of making promises it can’t keep. It’s called ‘Crazy’ (a very high bar at Eurovision) and it’s only mildly disturbed. Let’s have some honesty in song titles people!

Greece: Sung in Greek, which is good, but a pointless effect (second to Belarus’s Roseback) toward the beginning she holds up her hand with silver/grey paint on her palm which makes me wonder what she’s gonna do with it. I was hoping she was going to put silver palm prints all over the place or smear it over her white dress or something interesting but …. now she puts it back down and later holds it up again and then puts it back down… so dissapointing.

Finland: The song is so so but the delivery was fun. She’s strapped to a wheel at the beginning and does a full rotation (including singing while upside down which is not easy). I was hoping for more spinning but she climbs out of it to cavort with her dancers. They all look like they’re from a Syfy channel original movie about some alternate fascist reality with her dancers being foot soldiers while she’s the commander/high priestess. I like it, but…

Armenia: Sung in Armenian which is good… and the dude has some serious crazy warrior vibes and he’s standing inside a faux stonehenge style set (me expectations are through the roof) but the song is a big let down and he just seems to keep repeating QAMI! (wind) over and over. Pass.

Switzerland: Brother sister duo. She’s dressed in a way that she’s trying to look like Madonna by adopting a look that Madonna never quite affected (she may have considered it but ultimately did something else). Not that interesting a song and even though she holds a flare at one point and stands on top of the bass drum at the end the performance just kind of never gets anywhere.

Ireland: The video of this is pretty good, the best song Ireland’s had in…. ever? Most of Ireland’s winning songs were terrible but this is actually pretty good and I could see it becoming a hit independent of Eurovision. But the performance is kind of flat as the singer is hit particularly hard by the sound system and sounds really washed out and a little flat. The audience responds to the dancers (from the video) but it was probably supposed to have more impact than it does.

Cyprus: Last song of the evening and last Eurovision crazy lady of the evening. I’m not a fan of the song but she gives the non-musical part her all as she teeters around the stage on dangerously tall looking high heels. If there’s a problem it’s her image – the video is a bit more original but here it looks like she’s channeling Beyoncé a little too much.

Hate me for saying this…. but she looks blacker than Rachel Dolezal….

Like Loading...
This entry was posted in Uncategorized and tagged Eurovision 2018, loves me some Eurovision. Bookmark the permalink.