Oh dear, not a…. distinguished evening for Eurovision. On the one hand there were no trainwrecks or massive embarassments but on the other hand nothing was very… good either, just a lot of derivative Eurovision songs, well within the usual margin of boredom. There was also a persistent whiff of plagiarism in the air, half the songs sounded to me like they were based on other song I couldn’t quite place.

So, on with the dreary show…

Norway: The Belarussian from Norway with a Polish name (Rybak means Fisherman) is back! …… yyyay?? Kind of Timberlandesque number which just kind of lays there. Like Timberland Rybak has a very neotonous face and like Timberland is rapidly evolving from boyish charm to weird baby man whose face freaks me out. And there’s two other problems with this. It’s meta in a venue that has never appreciated meta material (in the songs themselves). Second, there’s no instruction on how to write the verflinger song! There is nothing about chord progressions or rhyme schemes or bridges… I must say that believing in it and singing it all day long and just rolling with it is absolutely not how you write a song.

Romania: I like the live performance better than the official video. At least there’s some weird stuff on stage with a bunch of mannequins with serial killer horror masks and the band does some inept but endearing drahmahtization. The song does one of those cheap tricks that always warm my heart with a big power anthem repeated one note chorus. Tenative thumbs up!

Serbia: Nice and ethnic and from a group that supposedly tries to work in medieval and Byzantine elements into their music but actually just ends up sounding like every other Balkan folk ensemble out there. They tragically underused the weird old geezer playing the recorder.

San Marino: The sound was terrible terrible terrible in the beginning. Throughout the evening the sound quality of the vocals was very erratic leading me to think that either the sound issues haven’t been resolved yet or part of the sound system was malfunctioning or… that they’re relaxing on the previous prohibition against canned vocals. Anyway this was a little too similar to a Swedish song a few years ago for comfort and the gimmick was stupid little robots. Not as stupid as Latvia’s lame robot thingy ten years ago or so but nothing special.

Denmark: Most of the better things so far this year have been more feminine or androgynous or neotoneous so this was a relief as an expression of unapologetic retrograde adult masculinity (or as close as possible for Eurovision). The song is some kind of neo-vikingism and they stomp ominously around the stage a time or two. It sounds a little undercooked and just misses greatness but I’m grateful for the change of pace.

Something tells me that real vikings did not emote like Judy Garland….

Russia: Sort of a mixed bag. Her voice is not very strong (understandable) and the English is not very good (I think Russians have always sung in English at Eurovision no matter how terrible it sounds… why?) Although everybody knows she’s in a wheelchair while on stage she’s stiting on a type of volcano that covers it up… Most of the actual work of carrying the song is done by the backup singers, which is made clear when she misses an entrance and for a second it looks like a lipsynching mistake.

Moldova: The musical equivalent of synesthesia. The song sounds far more Greek than Balkan. It has a nice peppy sound and fun choreography with a wall with doors that show parts of the people behind them and the three singers are dressed in the colors of the Moldovan (or Romanian) flag (one color per person). But when it’s over it’s too easy to forget.

Netherlands: Horribly, horribly misguided. One half of the duo that came in second a few years ago (with a copy of ‘Every breath you take’) with a country outlaw sound. What does this have to do with Europe? I love country music but Europeans have never understood it very well and this is no exception. The whole enterprise is not helped by muscular black guys who do weird dance moves that no black men have ever made while listening to country music. To add insult to injury he calls himself ‘Waylon’. There is one Waylon in country music and it’s not you, guy.

Australia: Some people don’t like the idea, but I’m perfectly okay with Australia being a part of this. Israel’s been part of it forever and Turkey has often participated. Eurovision is more than the sum of its parts. The song itself is nothing special but she gives it her all dancing furiously. The one thing that sets the song apart is an honest to god bridge. It was only when I heard it that I realized how rare that is in Eurovision.

Georgia: The three vocalists all look like werewolves in various stages of transition as they awkwardly stand around the stage but this is probably my favorite of the night for one simple reason…. POLYPHONIC OVERTONE SINGING!!! I hadn’t even realized that Georgia had this kind of thing. It’s a way of singing that makes it sound like on singer has two voices, it can low and gutteral (as in Siberia) or have a kind of electric transcendental sound. Please make to the finals, please! (I’m sure they have no chance….)

Poland: Ah, Poland why even try? As I’ve mentioned before Poland doesn’t do well at Eurovision for a number of reasons, not the least being that Polish musical tastes are weird and off-putting to most people and there are no other countries that automatically vote for Poland (the way the Scandinavian or Balkan countries do) and Poles living outside the country are mostly too cheap to pay to vote (this last may be changing some). The song is kind of a mixed bag too rock to be techno-dancy and too dancy to work as rock. I think it’s been used in a commercial here.

Malta: Malta I love you, but stop trying so hard. This is apparently a country that takes this very seriously but mostly it’s a one sided love affair, they won a time or two in the distant past but now mostly don’t make the final or finish fairly low. This year’s effort is a generic dance anthem

Hungary: I like this a lot, the song isn’t that memorable but the group gives this punk-esque rock number its all. One of my main criteria for liking Eurovision songs is commitment and these guys have it. The barefoot lead singer runs all over the place screaming like he’s undergoing an exorcism. Finally! Some energy!

My soul cries out in existential angst…. Thank you Europe!

Latvia: I love the Eurovision crazy ladies (this year best exemplified by Israel and Cyprus) but this is something else again, a Eurovision scarily insane lady. The classic Eurovision crazy lady is kind of half female drag queen and half pagan priestess revelling in her sexual and music power. Halfway through this I’m thinking “Do whatever you want to me, just don’t set my dog on fire!” Disengage with all possible speed.

Sweden: The ultimate Eurovision professionals, everything is calculated to appeal, the only thing lacking is a soul… This is a 70’s retro number and competently done but…. meh. The main thing I notice are his giant shoes. Those things are huge, how can he even pick up his feet in those?

Montenegro: What’s happened to the former Yugoslavia? Usually at least one of the countries that so stupidly broke up manages something interesting but this year? I was hoping to like this since it’s sung in Serbian (singing in any language but English always gets extra points from me) but the song just kind of goes nowhere and the singer has the ugliest worst fitting costume of the year.

Slovenia: Okay, this year’s former Yugoslav winner is Slovenia. Typical dancy number but delivered in Slovenian with a lot of energy. There’s a fake break in the music that worked in the semi but they’ll have to do something different in the final (if they make it).

Ukraine: A dated production with a vampire vibe (and he wears a weird contact lens that makes one eye look freaky). Most noted for the worst English of the year. I have to look up if part of this is in Ukrainian or Russian (doesn’t sound like it) or some other language because I honestly could not begin to understand most of what he was singing. 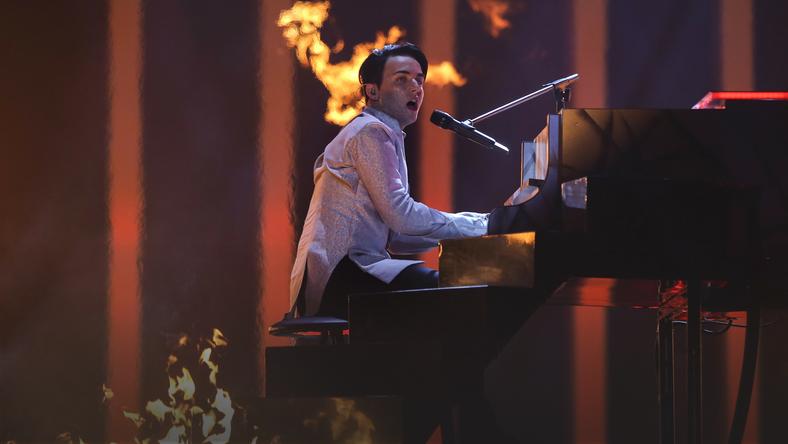 The Ukrainian entry spontaneously invents a new language to sing in….

That’s it, a slow horse race. I’m not even going to try to come up with ten songs I want to go into the final I’ll just list the ones I most want to be there.

Only four of my first and two of my second made it.. no Romania (nooooo!) no Georgia (NOOOOOOO!) Saturday promises to be a loooong night.

Like Loading...
This entry was posted in Uncategorized and tagged Eurovision 2018, loves me some Eurovision. Bookmark the permalink.