I’ve just started the second season of the Man in the High Castle and I’m not sure what to think. There’s lots of interesting stuff but we don’t get much about Nazi America since most of it is in the Japanese controlled West Coast and the parts in the the US of Nazis are mostly around Nazi headquarters.

Talking with a friend, we both agreed that if we had to choose, we’d choose to live in the Japanese sector because things seem a littler looser around the edges there but that might be selection bias and given their penchant for mass graves not exactly fun. 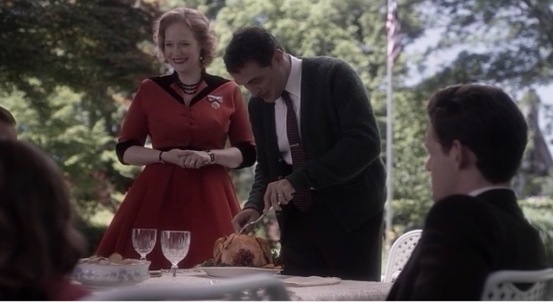 Somewhere around halfway through the first season I realized one of the most interesting characters is Helen Smith (played by Chelah Horsdal who I’m really going to be looking out for now) the wife of the head Nazi (Rufus Sewell’s best role… ever) and around two thirds through the first reason I realized it’s because she and her husband have the healthiest relationship in the show (maybe the only healthy relationship). They respect and trust each other totally and they’re both pretty sanguine about the risks of being a high level Nazi in times of coming turmoil.

At one point he tells would be spy Joe that he trusts her with his life and it’s the most honest thing he’s ever said. On the one hand, that has its moral traps as it soon becomes apparent her graciousness toward Joe had been part of a plan to trap him and put him at her husband’s mercy, but she’s so good at it that you’re left wondering until the last second.

Meanwhile protagonist Juliana Crain is a mess, emotionally unfaithful to her intensely annoying boyfriend (my least favorite character who goes about everything in the least effective way possible setting off landmines for the other characters but not much better in her dysfunctional love/hate relationship with Joe.

The couple with the worst instincts… ever, they should star as themselves in Who’s Afraid of Virginia Woolf?

At this point the Smiths have a perfect 1950s marriage (nostalgia version) so I’m sure it won’t last. You things don’t set up a perfect couple unless you’re going to test them severely or set them against each other. And I think that maybe they don’t intend the relationship to be so positive but at this stage it’s about the healthiest marriage on TV…