This is a one dish dinner from Eastern Poland. It’s made with young cabbage (mature cabbage doesn’t have the right taste or texture) and like much of traditional Polish food is very seasonal. It’s pretty easy to make. I’ve never been able to find a name for it beyond kapusta (cabbage). 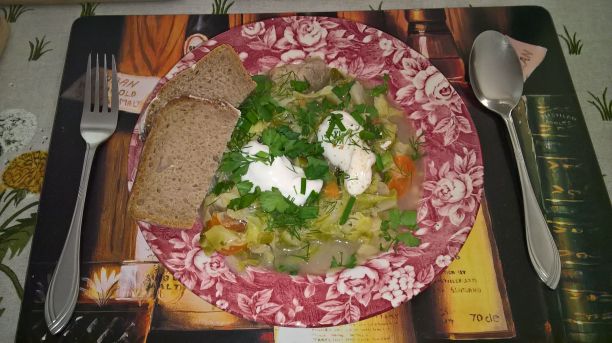 Cut out the heart of one (or two if they’re small) young cabbage and cut the rest into strips about an inch wide and two inches long (more or less). Put in a large pot with some water and bring to boil (and/or pour some boiling water over it) and let sit a few minutes. The idea is to blanch it without overcooking it. Then drain.

Bacon, found in its natural environment

In another large pot boil vegetables and herbs (carrots, onions, maybe parsenips, parsley, green onion bulbs and dill, salt and pepper) with a large slab of uncured bacon cut into one inch cubes (or raw short ribs). Cook on low heat until the bacon is soft. Add citric acid to taste (I like it sour as fuck). Pour the broth over the drained cabbage and stir around. Turn off the heat and let it sit a while.

To serve add sour cream to the top (the more the merrier) and sprinkle fresh parsely, dill and green onions on top. The bread shouldn’t be any darker than in the picture.

Leftovers will stay a few days in the fridge. I usually add flour or potato starch to the leftovers and have it as a side dish or with boiled potatoes as a one dish dinner. In health terms it’s a mixed bag (you can make it healthier with leaner meat or unhealthier with chunks of smoked lard at the end).

Like Loading...
This entry was posted in Uncategorized and tagged pictures of my food. Bookmark the permalink.