The second semi-final was…. better? more solid? more… competitive than the first?? Everybody is saying it was much stronger than the first and I guess that’s true but there wasn’t anything as ESC-ish as Australia in the first semi-final (my official favorite). Some songs seemed weaker or stronger in live performance than in the official videos I’d been watching. Fun but all in vain…

Armenia: Competent with a crazy lady vibe (an Armenian speciality) but… too early to get excited about. The performer herself seems a little pissed about the running order.
Ireland: One of my favorites before the competition, a genuinely catchy pop tune delivered in a fun way by a singer who wasn’t taking herself too, too seriously. Word is she was dealing with illness which is why her vocals were a little underpowered and some weaknesses with the song were emphasized..
Moldova: Excellent vocal but the song is bland and the sand-painting gimmick is a little past it’s expiration date.
Switzerland: Supposedly one of the bookie favorites… hate it and the vocal performance was weak…
Latvia: Pleasant enough song that goes nowhere and takes its time along the way.
Romania: Lots of fire (the leitmotif of the evening the way bondage was the leitmotif of the first semi) but the song doesn’t do anything for me and bunch of busy production semi-vampires doens’t help that. Anything vampire related now just makes me think of What we do in the shadows (hilarious show after which it’s impossible to take Vampires seriously).

Denmark: Lightweight pleasant little ditty that’s nice and cycles through four languages. She sounds best when she sings in French, then Danish, then English (close to a tie but when do you get to hear Danish in Eurovision?) and her German sounded kind of awful.
Sweden: Perennial jury favorite Sweden with another bookie favorite… that doesn’t go much of anywhere. It’s competently performed but misses being memorable by some distance.
Austria: Glum ballad delivered in a glum setting… Glum is the key word here.
Croatia: Young guy who can hit the money notes but hasn’t yet figured out that being able to hit the money notes is not the same as being a good singer. Pass.
Malta: I was watching Maltese news before my February trip when the performer was selected and they seemed to spend half the newscast talking about her. Malta takes this thing very seriously and this is their best entry in several years. The song is kind of a kitchen sink number but the singer gives it her all.
Lithuania: What to write about this? Do I have to? No, I don’t.
Russia: Fairly hated the video though the live performance was very good. The song barely rises to mediocre but the singer is a committed and skilled pro and he makes you believe in it while it’s on… but 30 seconds later I forgot all about it.
Albania: A folkish power ballad with a bland staging but she makes up for it in sheer commitment to the song and to herself. Supposedly the Israeli production managers weren’t delivering what the Albanians had wanted but she makes it work anyway.
Norway: Big, messy (but fun!) train wreck with three soloists one of whom is a large blad Sami guy whose traditional singing sounds a lot like gargling. Lots of northern imagery and ethnic pride. I’m all in! 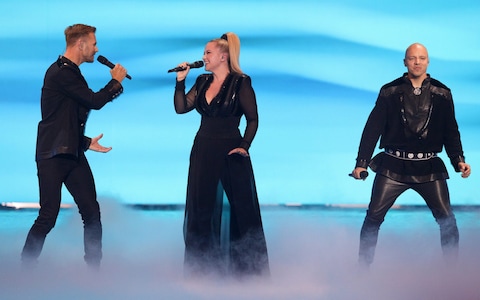 Netherlands: The odds on favorite with the bookies. Another song that’s a lot better on stage than the video. Minimal performance but that works in the song’s favor.
Macedonia: It’s very creepy how everyone went from saying “The Former Yugoslav Republic of Macedonia” to “Northern Macedonia” without missing a beat and with no overt reference to the name change… Very Soviet. Sorry Greece I’m not gonna play that stupid game. The song is a girl-power type thing that… yeah… whatever
Azerbaijan: Easily the best entry in the official video sweepstakes. Live, in a staging completely unrelated to the video the song is… pretty good but the weaknesses in the song come out a little more. It’s all just a bit too by-the-book by a Bulgarian whose written a total of eight Eurovision songs for five different countries including Malta’s entry this year. Sorry, Azerbaijan, you’re not part of the solution, you’re part of the problem.
The only song I wanted to go through that didn’t was Ireland, and there wasn’t anything I really hated… or super liked. Kind of very polish meh’ness.
We’ll see how the final goes Saturday.
What I’d bet on… Netherlands, maybe Switzerland (huge audience pop), maybe Russia (on the basis of the Russophone diaspora)? Azerbaijan? I think Sweden will be a jury but not an audience favorite.
My favorite (and hope it wins): Australia! The only really magic moment so far this year.