A bit late, but what the hell… Some final thoughts on Eurovision 2019.

Grand Prix du Keeping the Lid On: I knew there would be no security lapses like the Portuguese slackers who let some mentally ill person disrupt the UK’s entry. I imagine security and snipers were all over the place just waiting for someone to try their luck.

Grand Prix du Branding: When it comes to generating publicity no entry this year came close to Hatari who turned an unlikely song and style and a 10th place finish into a global launch pad. In retrospect everything they did was done in order to generate buzz. 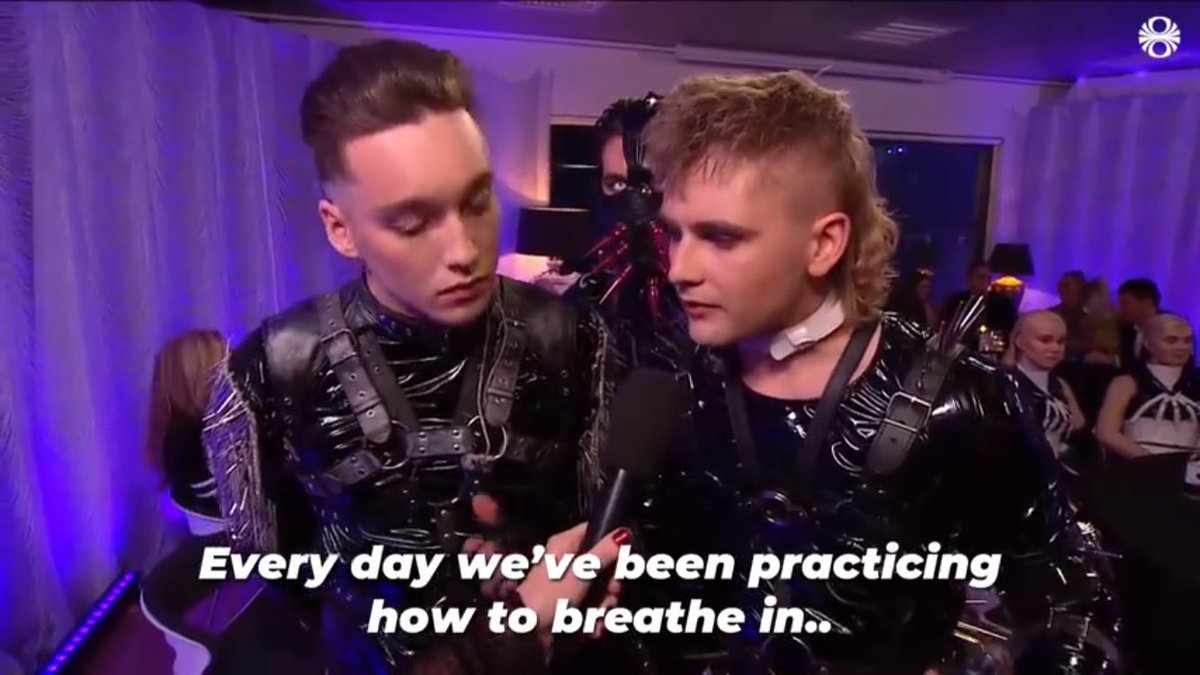 Are they dismantling capitalism or riding it for all its worth? Yes, of course!

It began with their techno Rammsteinish entry and the least Eurovision title ever (it translates into ‘Hatred will prevail’) and their pre-contest criticism of Israel. While in Israel they became known for their oddball interviews where they discussed dismantling capitalism and cleaning their bondage gear in total deadpan. And then there was their final ‘Fuck you! Hosts!’ when they held up Palestine banners in what they knew would be the last tim they had the cameras to themselves. Millenials can be annoying as fuck but they get branding down to their deepest depths of their souls. Well played little S&M captialism dismantling weirdos, well done indeed!

Grand Prix du Niceness: While Eurovision was meant to create common feeling of Europeanness, the actual contest and voting doesn’t do that. Except… while checking out various countries’ entries on youtube it was very heartwarming to find each and every comment section full of people from other Eurovision countries saying how much they liked the song and very little of the tedious bickering that informs much of the official results. Maybe it’s working after all?

Grand Prix du Stupid Assholes: Belarus jury, take a bow! These idiots talked about their voting (strictly verboten) after the first semi-final so they were not allowed anywhere near the Grand Final. Instead of the jury votes they used an ‘aggregated result’ by averaging the real votes of several countries that have historically voted in a similar manner to Belarus. Keep your traps shut Belarus jurors, you’re there to make dumb old-man votes and not be taken seriously.

Grand Prix du Total Fucknuts: If the Belarus jury members weren’t stupid enough, some nameless loser in the EBU managed to report the fake Belarus jury totals in a completely bassackwards way. So during the broadcast rather than the top 10 results the bottom ten in reverse order were given so that they pubicly award douze points to Israel (which it appears was actually in last place in the ‘aggregared result’.

Grand Prix du Just Shut Up!: Madonna, you’re not European and no one asked for you to be there and especially no one wanted your aging pop star solutions to intractable political conflicts. No. There is a thing called ‘aging gracefully’, you kind of ought to look into it.

Listen to this three times and try to not find yourself humming the tune.

Grand Prix du I Wish I’d Thought of That: In a hilarious turn of events, some Israelis fed hundreds of hours of Eurovision songs (melodies and lyrics) to an AI learning program. There was some human intervention in assembling the AI-generated results, but the final result is so glorious that I don’t care. It’s called “Blue Jeans and Bloody Tears” and they even enlisted Izhar Cohen, Israel’s first winner (1978) to sing the thing I’ve been listening to it over and over and unironically love it.