I’ve been thinking about grocery shopping experiences lately, especially how they’ve changed in Poland since the communist period. I only spent a couple of months in the People’s Republic (and in a privileged position of a foreigner at that). I missed the first day of capitalism in Poland, but I’ve been here for a large majority of the time since. 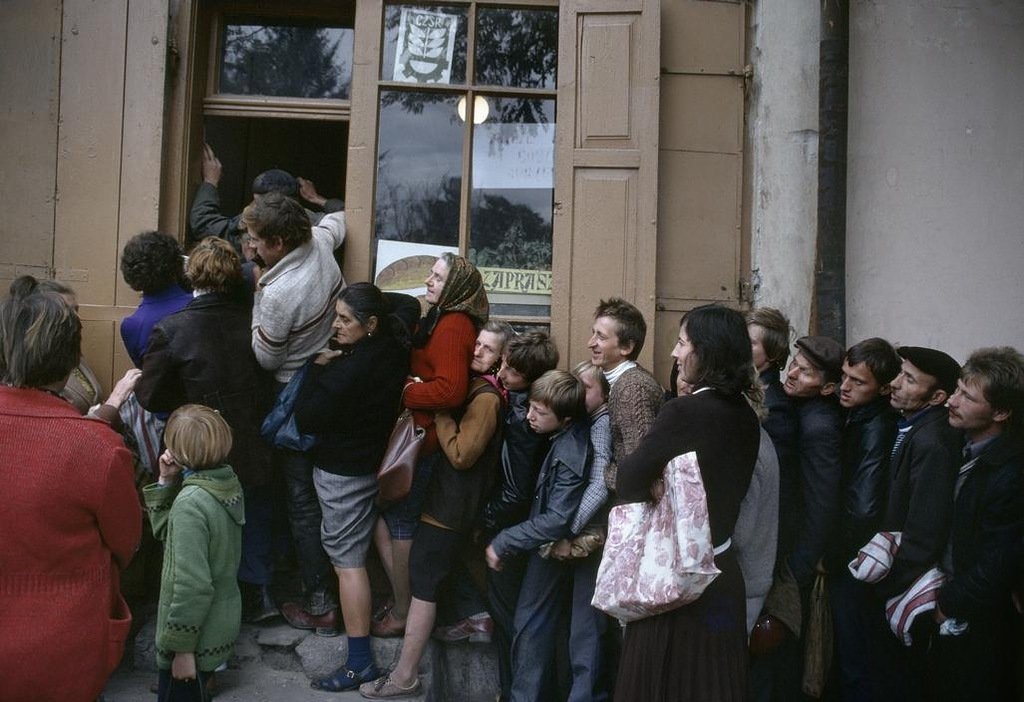 In the communist (more correctly ‘socialist’) period, shopping was a grueling ordeal. Long lines snaked out of any story that had something that people might want to actually buy and some things (like meat and dairy and sugar) were still rationed, if you could find them which was far from certain. There were private farmers markets but the prices were actually close to the real value of the goods (instead of the heavily state subsidized prices in stores) and most people could only indulge on special occasions.

Not socialism: Trying to figure out what to buy….

Back in the stores, the entire process was carried out by resentful salespeople who hated customers and who pounced on any hapless customer who made a mistake with abusive screaming. For shoppers other customers were the enemy that you had to defeat in order to find something and a strong vigilante culture prevailed in the endless lines in stores. Nobody went hungry per se, but finding food you wanted to eat was not something easily carried out (and shortages in stores were one reason that many people had to have at least one meal a day at their workplace).

There were ways around the shortages in shops and a thriving black market (often carried out in barter rather than worthless Polish currency) and a million small scams going on but just keeping food on the table amounted to something like a second job for many people and it wasn’t because they didn’t have money, people’s wallets were bursting with zloties but the path from farm to store was long and perilous and not many foodstuffs survived to make it onto the shelf.

In the turbulent 90s the shortages in stores were gone but replaced by a kind of savage capitalism that did not help matters and certainly didn’t make anyone more pleasant or polite. Things did slowly start to change after 1999 or so…

And now it’s a different reality completely. A few months ago on a Poland related forum another foreigner was complaining about rude salespeople in stores… and another poster (Polish) and I had to say we can’t even remember the last rude salesperson we dealt with (you used collect rude salespeople stories on a weekly or daily basis).

Taking note of my recent experiences: Once the aisle was blocked by a lady with a baby carriage and she smiled(!) and moved it out of the way before I could say anything. I started pushing someone else’s cart by mistake and the shopper using it smiled and laughed when she said it was hers (in previous years the automatic thought would be that I’m trying to steal something or take some hard to find item from her cart). A cashier (Ukrainian) pointed out that the expiration date of the cake I was buying is today and asked if I’d like to get another instead. The other day another cashier (also Ukrainian) asked if I was collecting the promotional stamps that can be exchanged for stuffed toys. I said no and that she could give them to the next customer (a woman with kids who was collecting them who thanked me and the cashier for passing them on).

To people who have had no contact with socialist Poland (or the immediate aftermath of socialism which was no walk in the park) it’s hard to convey just how revolutionary a change had to happen to turn the grueling and hostile process of buying groceries into a series of banal but pleasant social interactions.

It wasn’t socialism that made shopping a pleasant experience in Poland and socialism did not engender any social feelings of solidarity (pun intended) or concern for other people in the country. Of course the worst abuses of neoliberalism which has the elite trying to get people to eat process GMO plant slurry and bugs and live in slightly nicer homeless shelters before having their bathroom breaks monitored in the gig economy MacJobs aren’t much better. The extremes are obviously fucked beyond repair, what’s needed is something in the middle…

Like Loading...
This entry was posted in Uncategorized and tagged life in Poland, neoliberalism, socialism. Bookmark the permalink.

1 Response to Socialism and Social Relations